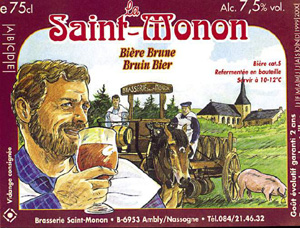 Our travels took us further today, deep into the heart of rural Germany. I still had a car full of Belgian beers so I was happy, although the only worry I had was keeping them cool. I reverted to buying bags of peas in the supermarket to wrap around those selected but it really was only a temporary measure, and of course I ended up leaving a Hansel and Gretel style trail of peas around the European hinterlands. It had been another long day on the road, and after throwing our tent up and knocking up some dinner I settled down with a Saint-Monon Brune.

St. Monon, believe it or not, was Scottish. Like us, he found himself travelling across Europe albeit it was probably a little more taxing in the 7th Century – I found it hard enough finding the campsite with my sat-nav! He had been visited by an angel (allegedly of course) and instructed to find the village of Nassogne so that he could evangelise the pagans living there. In true tradition of a Saint, he came, he saw and he evangelised, although not without a little help from one of the pigs of the flock he adopted. The pig dug up an old Roman bell called a tintinnabulum, which St. Monon used to call the people to prayer. Over time our Scottish monk worked hard to recruit locals and to destroy the pagan idols, although not without upsetting those less willing to submit to the saintly ways. In 636 St.Monon was ambushed in his oratory by unrepentant sinners who murdered him with a wooden spear. I am beginning to learn that it’s not all rosy being a Saint. They always seem to get offed in the most alarming of ways (#18, #29). Of course he wasn’t a Saint up until this point, but the people of the local area who so appreciated the work he did with the animals made him the Patron Saint of Livestock, of which he still remains to this day.

The beer probably was a bit warm still as the peas had defrosted, but then browns tend to prefer the warmer climate. It was a particularly muddy pour, with a real milk chocolate colour to it – almost to the point of looking quite unappetising. The experience on the tongue was quite spicy, and almost certainly coriander, thus quite unique to date. I wouldn’t say I would go buy it again in a hurry but it was worth the taste, even if it didn’t have the legs to be a stayer – a bit like poor St. Monon.