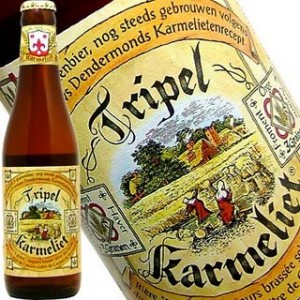 I am surprised as anyone that it has taken this long to try this beer. After the Dulle Teve (#228) and some wonderful aged Chimay Blue (#45) from the depths of the Kulminator cellar it was time to try this highly rated Tripel.

In many ways the Tripel Karmeliet is a new beer; launched by the quirky Bosteels brewery in 1996, however the original recipe is said to hail from the former Carmelite monastery in Dendermonde. It was there in 1679 that friars made a beer brewed not only with barley, but also wheat and oats – proof that multi-grain isn’t a 21st century phenomenon. It is now heavily spiced and flavoured with Styrian hops which may have been beyond the friars, as was the bottle refermentation, but the idea was the same.

The Karmeliet, or Carmelites, were an influential bunch in Europe in the late 17th Century when this beer was first conceptualised. The Order is said to have originated on Mount Carmel near Haifa in Israel. The mountain has significant Biblical relevance in its connections to the prophet Elijah, and has long been a refuge for hermits laying down their lives to God – long before a 12th Century chapel was built in honour of Mary by the hermetical Brothers of St Mary of Mount Carmel. It was here that the typical characteristics of the Carmelite Order were formed; notably the importance of poverty and manual labour, and latterly the devotion to silent prayer.

Around 1235 the Carmelites were forced to flee Israel under threat of the Saracen invaders and Europe was the obvious destination for many. Over the next two hundred years the Carmelite Orders grew in importance and power, and monasteries blossomed in this new spiritual and intellectual age. Relying on their own labour and alms it was a natural inclination to begin to brew beer for the local population and save them from the evils of disease-ridden water. Of course the Carmelites would have met their match during the French Revolution and they have been virtually wiped off the map apart from small areas of the Netherlands and Belgium.

In the Tripel Karmeliet however the Ordo Carmelitarum lives on, and lives on in style. This is a robustly delicious brew which is instantly recognisable on first looks, and then taste. Its appearance, most notably served in the ostentatious and slightly tacky fleur-de-lys glass, is a light blond carbonated brew, which once put to the nose offers up a miasma of citrus and spice. The mix of wheat and oats into the grist gives the beer a uniquely dry, crisp and refreshing flavour which is bitter and sweet, and yet fruity and hoppy at the same time. It tantalises your tastebuds and defies you to order another. Dont be fooled though – At 8.4% this particular beer needs respect. The Order of Carmelites are well known for their fantastical visions, and I had one or two myself the next morning.