The Bush Blonde is a relatively new creation, being only first brewed in 1998 on the 65th anniversary of the launch of the Bush Ambree (#3). It was the first blonde beer produced by this very traditional brewery, who are proud of their roots and values. Dubuisson only have a small selection of beers considering their status and size, and steadfastly refuse to produce label beers for anybody else. In fact, prior to the launch of the blonde, the brewery only offered the Ambree and the Bush de Noel (#83).

The key to the traditional outlook may lie in the history of the brewery, which was first formed in 1769, by Joseph Leroy (a direct descendant of eight generations of the current manager Hughues Dubuisson). It is the oldest brewery in Wallonia, which is a source of some local pride, and is still situated on the very same spot it was first built. Even before then, Joseph Leroy was brewing beer across the road on the Ghissegnies land, which was a seigniorial estate – these breweries were then exempt from tax and particularly lucrative. The Empress Maria-Theresa of Austria who at the time ruled the region had picked up on this quite quickly and decided in 1769 to order their unconditional destruction. Joseph Leroy quietly packed up his kettles and tuns, crossed the road, and set up his own independent farm brewery. This quiet determination has been a strong family trend ever since.

It had been quite a while since I first drunk the Bush Ambree, and to be honest I certainly didn’t have great hopes for this one. My drinking pal Andrew had gleefully passed me his last bottle of this, with the view that it was one of the most revolting drinks he had ever tasted. I would add it to my 1000 and let myself be the judge of that. It was certainly very strong, with the ethanol very evident in the flavour, but with just 250ml of the stuff, that wasn’t necessarily a bad thing. I actually preferred this to the Ambree, and certainly couldn’t see what was so dislikeable about it. The Blonde definitely wasn’t a classic, but neither was it worthy of a sub-average score. I will enter it into my pantheon of beers defined as a ‘workmanlike strong Belgian blonde – nothing else’.

The Cuvée des Trolls is a curious beer which has completely marketed itself around the legend of the troll. Quite what this infatuation with trolls and beer is remains a bit of a mystery, but it is interesting anyway to depart from monasteries and breweries for a short while.

The Cuvée des Trolls website goes into a fair amount of detail with regards to the legend of the troll, and you can make up your own mind whether the small hop-helmeted little bugger on the label fits your imagination or not. My view, having travelled in Scandinavia for a while is more aligned to a two to three metre lumbering beast with a big nose and plenty of hair. It is said that the Troll originated here from Norse mythology, although many in Sweden and Norway will argue that they really do exist. The discovery of rock formations known as Krägntrolls is regularly said to confirm their enigmatic presence.

I once spent a fairly atmospheric afternoon in the dimming sun on the island of Öland off the coast of Sweden, traipsing alone through the Troll’s Forest at the northern tip. The trees were gnarled, the canopies formed macabre illusions and almost every whorl on every tree seemed to portray a monstrous façade. To be honest I was pretty relieved to emerge the other side.

The troll has been a regular part of folklore and fiction. The Moomins remain perhaps the most famous representation of a bohemian family of trolls from Finland, but anybody who has read the Harry Potter books, or The Hobbit will recall the presence of trolls.

Many Scandinavians suggest that the average human being will never see a troll as they live underground and prefer to be in the dark. In that sense of course I am beginning to see why a troll might be compared to a good beer, of which the Cuvée des Trolls could be labelled. It was first brewed in September 2000 in the Brasserie ‘Le Brasse Temps’ in Louvain-la-Neuve where it is still brewed and served unfiltered. My first taste of the beer however was from the bottle where it is brewed at Dubuisson in Pipaix and is completely filtered. The rest remains common however, with a generous handful of orange peel added to the wort to give the beer its fresh scented taste.

I didn’t really pick up the citrus flavour and thought it tasted more of honey than anything else. It was however pretty impressive, sinking very silkily down my throat on a cold night. It is probably too small at 250 ml to warrant regular buying, but I am sure there is a two litre one somewhere lurking under a rock in the forest waiting to be found.

Bush de Noel represents the first Christmas beer on my journey. If you are going to stock up on rare winter beers for your cellar, then the winter months are the ideal time to do so, as there are many rare specials made by breweries which normally suit the cold winter months. There tends to be a good number of reasons why the seasonal winter beers are brewed, and I will run through these below.

Firstly, and probably the original reason, is that of practicality. The late summer harvest usually ends up leaving plentiful supplies of grain, and the old stocks simply need to be used. Coupled with the need to provide enough beer through the winter months, this additional brew is just common sense really.

The second reason really stems from the first, in that it gives the brewery the opportunity to make a beer that is well suited to the winter conditions. In the cold weather, there is nothing more warming on a bleak night than to be tucked up by the fire with a strong dark beer full of spices and fruit. Not all Christmas beers fit this description, but many do. The spices vary and often include cinnamon, allspice, ginger or nutmeg and variations of dried fruit. Often breweries try to replicate Christmas treats such as mince pies in the liquid form.

This also gives the brewery a third reason – that of marketing. Customers like to try new beers, and the winter months tend to give the good craft brewer a great reason to experiment. Winter beers can often vary every year as the creative brewer tries to find great new recipes that might end up becoming a popular year-round brew. These Christmas beers are then often showcased at a winter beer festival, like the one in Essen.

Brewers see these as a Christmas present to their customers. Most tend to use more ingredients in these Christmas beers, and as the beers tend to be stronger, there is a higher levy of duty to be paid to the taxman. Brewers, particularly in Germany, argue that there is not so much money to be made on Christmas beers, and therefore this is their gift for their customers loyalty. Whatever way you look at it, if you are planning a raid on the Belgian countryside to stock up, this is the time to do it !

The Bush de Noel may be small but it is potent at a steaming 12%. It has a dark red-amber colour which is attained by adding caramel malt in large quantities. The beer is also quite bitter which is achieved by dry-hopping while the beer rests. It is one of the more recognised Christmas beers and can often be found in the UK and in many Belgian drankencentrums. It has been doing the rounds since 1991 believe it or not. It was fairly pleasant, but like most beers from Dubuisson it was over just too soon, which considering its flat appearance wasn’t a major worry. It reminded me rather oddly of the colour of water that is left to rot in a car radiator for years – dark and coppery. It is strong this beer, and ideal for a winter night in, but I’m sure there are so many christmas beers better than this !

(Post-Script) – interestingly the little house on the label covered in snow is the main Dubuisson brewery on the main Pipaix road. 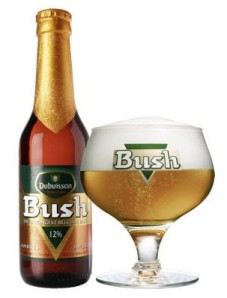 Bush Ambree was the original Bush Beer produced by Dubuisson. From 1933 it was pretty much their only beer until 1991 when the family began to extend their range. This beer is also famous for being the oldest Belgian beer brand on the market, in that the recipe has remained completely unaltered since first brewed over 70 years ago.

It is interesting to note that the name Bush, is the anglicised name for the French Dubuisson. This was due to the desire of the Dubuisson family to produce a beer based on the English barley wines of the time. Stepping back into the present day, it is clearly noticeable in many shops round the world, particularly in the UK that the name has changed to Scaldis. Aside from a potential sexual connotation why would a brewery with such a rich history opt to change their brand to something that sounds more like a Latvian washing detergent?

Essentially it all comes down to corporate greed – the now defunct purveyor of Budweiser, Anheuser Busch decided in 2004 that Bush Beer was too similar in name to their weaker product Busch Beer, and so began a completely uneccessary legal battle against this small Belgian brewery. The minnow of course lost out and thanks to a ruling from the International Court of Arbitration in Paris they were only able to keep the Bush name in Belgium, France, the Netherlands, Luxembourg, Italy, Switzerland and Portugal. Elsewhere it must be Scaldis! Petitions and protests were launched all around the beer community but common sense of course did not prevail.

This was another beer drunk in the safety of my own home, from my ever growing collection bought from ‘Beers of Europe’ in Norfolk. I had pretty high hopes for one of the strongest beers in the Belgian catalogue, but despite the initial impressive flavour, I found it didnt really bring anything else of much distinction to the party. By the time the meagre 250ml had been downed I really couldnt think of anything else to say other than that this beer appeared to be little else than an expensive Tennents Super !