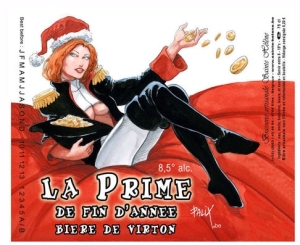 This was my first beer from the St. Helene brewery. Interestingly I had driven through the town of Virton on a recent jaunt to Luxembourg and the location of this brewery had randomly popped up on the Sat Nav (Not strictly true as I had painstakingly entered all the locations of the breweries into it before I left – what else would a true beer professional do?). I was surprised to find a small suburban semi-detached house in a quiet residential road. I peered in the front door and called out a few times but nobody heard me. I got back in the car and we drove onwards – the shortest brewery tour ever, and one of the most unremarkable.

It turns out that the current location in Virton was actually something of an upgrade from the previous location. Eddy Pourtois started the ball rolling in 1993 following a succession of experimental home brews which friends and family had loved and encouraged him to continue. By 1995 the first amber beer was produced and the St Helene brewery was kind of officially formed. It took its name from the then home address of 21 Rue St. Helene, Orsinfaing. Despite the 2003 move to Virton, the brewery has kept the same name, and until only recently, virtually the same range of beers.

Eddy Pourtois slowly began to take himself seriously and was making more and more beers. He took courses in biology and chemistry and by 1998 had officially accepted his position as a reputable local brewer. The marketing began in earnest in 1999 and despite the modest facilities he managed to knock out three hectoliters of beer by the end of the year. A further sixty followed in 2000. Eddy Pourtois had found himself and began the search to find larger premises to continue his adventure which would eventually lead him to Virton – where we had almost met.

I’d managed to pick up a 750ml bottle of the La Prime de la Fin d’Annee at the Bruges Beer Festival later in the year based solely on the nostalgia of my little detour. It was an apt name for a beer that is essentially brewed for festivals at the end of the year, and is only produced from October with September reserves. The title of the beer is a reference to a term used in France to denote the end of year reward in businesses. Often a 13th month salary is paid to workers as a bonus for their hard work over the year. This beer is the St Helene bonus to its punters. I was only happy to oblige.

I decided to share the bottle with my sister who isn’t one to shy away from a decent beer and we were both suitably impressed. It poured a muddy milky chocolate in both colour and texture and sported a most mysterious nose. The taste was ruggedly unique and rustic, with the subtlest sweetness of chocolate throughout. This was backed up by the bottle which confirmed it was brewed with colour, caramel and chocolate malts. My only regret was that I had shared my annual beery bonus.