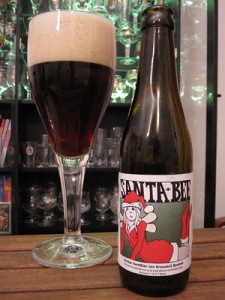 Kris Boelens family run brewery from Belsele essentially started brewing in 1993 at a time when the mini revival of Belgian beer was in full swing. Towns and villages were tired of standing by and watching the conglomerates like Heineken and InBev pick off their historic family run businesses. The Boelens story though wasn’t a particularly new one – Kris Boelens can trace his brewing family tree right back to his great grandfather!

The Boelens brewery actually began its life in Lokeren in the 19th Century, a dozen miles away from the town of Belsele, where the family opened another brewery called De Meester. The owner would eventually pass away leaving his wife with a business she was ill-equipped to run. As she was also the sister of the brewer of the Boelens brewery she sought help from the family. It would be Henri Boelens, (her nephew, and Kris Boelens grandfather) who had trained as a brewer who joined his aunt in Belsele to take the business venture on. Henri eventually decided to rename the Belsele brewery Boelens; and it was in this very building that the current Boelens brewery is still based.

At that time the brewery was providing for seventeen pubs and inns in the town, which considering it only had a population of just under two thousand was pretty impressive, however fortune was to turn sour for the family run business in the shape of the German invasion during World War I. The systematic removal of all copper from Belgian breweries meant that the Boelens family had to choose another means of survival. They gained agreement from the German army to change the nature of their business into the distribution of existing beer, and thus brewing stopped, and wouldn’t start again until 1993 where we begun our little tale.

The Santa Bee, or the Kerstbier as it is more often known is unsurprisingly the Boelens Christmas offering. It is a dark tasty brew, very much in the typical Christmas beer genre. It poured a heavy chocolate brown with a thick rich head and reminded me somewhat of the Sainte-Monon Brune (#55). I’m definitely growing to like this little brewery who have yet to disappoint me on my journey.  There’s also plenty more in the cellar to come.

If ever there was a beer that deserved to be blogged then Waase Wolf is that beer. I mean, here is a beer with the tagline, ‘Not for little lambs’ that was brewed in memory of a legendary wolf that ran amok on the Belgian/Dutch border in 2001 mauling and killing sheep for fun. Brilliant stuff – and I reserve any apologies to any sheep offended by this article.

The terror started in October 2000 when a number of farmers around the Zeeland/Waasland border found their valued ovine littered as carcasses across the countryside. Initial thoughts were that this was the work of a depraved fox or dog, but once an eye-witness video of a stray wolf emerged, coupled with reports of a private owner losing such an animal, then word of mouth spread – as did the number of mutilated flocks. The farming community laid siege to the local authorities, and soon the united forces of the police and specialist wolf teams were scouring the countryside in tracking down the beast. Everyday new evidence emerged of alleged sightings as more and more victims piled up.

Like the Beast of Bodmin did in the UK many years ago, so in this small quiet area of Belgium did the Waase Wolf burst into prominence in local folklore. Known at the time as ‘Isegrim’, the animal captured the nation’s attention. Sheep farmers became increasingly anxious as the body count continued, and in the Netherlands rewards of up to 10,000 guilders were placed to kill the wretched beast, much to the dismay of the hordes of conservationalists who rallied in support of the perpetrator, sticking two fingers up at the families of the poor innocent dead sheep.

Then one day in late December, with the collateral at 62 (47 in the Netherlands, and 15 in Belgium), an anonymous email to police reported the beast had been quelled by a bullet and buried humanely in the woods. Nobody ever found the whistleblower or the cadaver but sure enough not another animal was harmed after the 22nd December, and on the 9th January 2001, both police forces officially closed the case. Cue a lifetime of novelty thimbles, tea-towels and t-shirts for anybody visiting the area. And of course where else but in Belgium a commemorative beer.

The Waase Wolf was a thinly bodied amber that was littered with sediment. It smelt absolutely delicious, and once settled I was able to sit back and enjoy this lovely beer. I wasn’t really expecting from the first appearances a really light fruity taste and it made a real change from the recent selection of beers I had tried. There was enough spice and hops to make it interesting, coupled with the delicious sweetness which always seems to keep me coming back for more. The Boelens brewery have delivered  much more here than simply a commemorative beer – I will definitely go back for a pack of these.