There are two beers which make up the Bourgogne des Flandres range. Most punters would likely have first tasted the brune, which is a famous sour ale from this area of West Flanders. I however first managed to get my hands on the golden Bourgogne des Flandres Blonde, the stronger but less auspicious sister beer.

The most striking quality about these beers is perhaps the bottles. Both come packaged without traditional labels but with beautifully crafted and embossed images of the Bruges skyline, complete with the famous Belfry, or Belfort. It was here about seven generations ago that the artisanal brewers of the Van Houtryve family first got their hands dirty with the fine sour brown ale. A further clue to this strong family tradition is the shield of the Van Houtryve family which bedecks the neck of the bottle itself.

The family stopped brewing the beer themselves in the 1950’s, whereupon distant relatives at Verhaeghe took over the production; themselves well renowned for their sour ales of Vichtenaar (#146) and Duchesse de Bourgogne (#105). Time ran out on this partnership however in 1985 when Timmermans offered to become chief custodians. The 25 year relationship has been successful for the Bourgogne des Flandres beers, which have been marketed under the Anthony Martin’s “Finest Beer selection since 1993.

To be fair most of the marketing around the beers is about the famous sour ale which continues to gather dust in my cellar, however the blonde accompaniment is no trite addition. It is a lively little beer which mixes a spicy bitterness with a dry hoppy nature. It doesn’t exactly blow you away, but I’d recommend anybody buying at least one and keeping the bottle on a dusty shelf somewhere for friends and family to admire at their leisure. 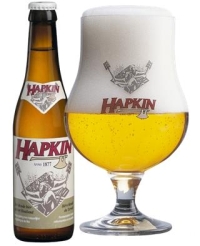 Hapkin may now be brewed by giant Alken-Maes, but it hasn’t always been this way. The Brouwerij Louwaege was formed in 1877 and lasted five generations until its premature closure in 2002. The 7500 square metre site in Kortemark, West Flanders was eventually demolished after the acquisition and it is hard now to find much information on this sad demise.

The axe truly fell across the head of another community brewery – a fairly apt analogy for a beer symbolised by the weapon of choice of a certain Lord Hapkin of Flanders. Also known as Boudewijn Hapkin/Baldwin VII – the Count of Flanders.

This terrifying figure only ruled Flanders for eight short years, but his contribution in this time was a bloody rebellion against the murderers, thieves and oppressors of the people of his land. A kind of Belgian Robin Hood, seeking a peace for his land by the most ironic means. Often this was at the expense of the nobility who wielded horrific abuses at the hands of the middle classes.

Hapkin was born in 1093, and came to power at a rather unripe 18 years old. He would eventually die on the battlefield in 1119 – legend has it through a resounding cut to the head – a fitting end for a man renowned for his bloody axeplay.

It seems a rather odd choice of hero for a beer, but there is a nice twist to the tale. During his reign over 900 years ago, Lord Hapkin commissioned a strong blond beer at the Abbey Ter Duinen Cistercienzerpaters, a beer which history dictates was the original recipe of the latest Hapkin incarnation. The beer was allegedly so good that it was known country wide, and so strong that it made even the most cowardly soldier feel invincible. It is almost taken for granted now that Lord Hapkin would have bloodily fallen in the name of his people, drunk on his own home-brew.

This is certainly a beer in the mould of its master. Strong and belligerent in appearance and thick and dangerous on the palate. It looks like a proper tripel and with the addition of a sweet back-kick you wouldn’t be disappointed if you inherited a crate of this. It did fade a little near the end, a little bit like the Champions League game I was watching at the time, but definitely a worthy contender for something to knock out your mates with. 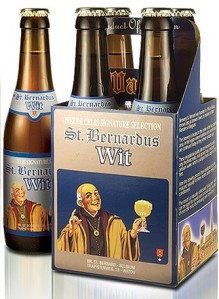 Beer experts tend to say that if you want to try a beer that tastes like Hoegaarden (#81) used to then there is no better exponent than the St. Bernardus Wit. This comes as no surprise as the beer was actually developed in co-operation with Pierre Celis, who of course was the mastermind behind the success of Hoegaarden. The main difference is that the St. Bernardus gets the traditional Belgian secondary fermentation in the bottle which just adds to the steely quality.

The term wheat beer is something of a misnomer, as these beers are not made 100% from wheat – in fact probably only about 30-40% of the mash. The rest is more likely to contain forms of pilsener malt. It is this 30-40% though which gives the wheat beers their hazy milky glow, which in turn has tended to coin the appellation ‘white beer’. Hops are generally used less frequently as they tend to impair flavour, and brewers such as Celis have traditionally been more subtle with spices such as coriander, or fruit – most commonly the peel of an orange.

It is surprising that white beers are not more common in Belgium as wheat tends to be in greater abundance than barley and is therefore cheaper to produce. Wheat beers tend though to be somewhat lower in strength than dubbels, tripels and typical Belgian ales, which may go some way to explain why these beers are more popular in Germany or the USA. Others argue that wheat tends to clog up the brewers equipment and is therefore more painful to brew due to the rigours of keeping the kit clean and free from infection.

Either way I’m not really a wheat beer man, or I wasn’t until I tried the St. Bernardus Wit. It was altogether more robust, with extra colour and fizz, and it was both crisp and sharp with a flavour that actually challenged your taste-buds. I could actually taste the hints of orange peel and coriander which is saying something. I think this is best suited to a warm summers day in Flanders, but all in all a pretty impressive way to bring up the hundredth beer! 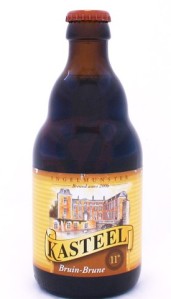 Kasteel means ‘castle’ in Flemish, and is a direct reference to the U-shaped building that sits proudly on the label. The present castle dates back to 1736, however there has been a castle on this site going all the way back to 1075 when Robert de Fries, the Count of Flanders, built a square fortress on the ruins of an old monastery in the town of Ingelmunster.

The luxurious residence has changed hands many times since it left the hands of the Counts of Flanders in the 14th Century. There followed 200 years of ownership between the Dukes of Burgundy and various other German and French families, until following the Battle of Ingelmunster in 1580, the German colonel Otto van Plotho, who was a mercenary fighting for the French, inherited the fiefdom. It was during this time that the various battles in the town ended up with the Castle completely destroyed and thus the most recent incarnation.

The castle ended up back in French hands in 1825 when the Count of Montblanc inherited the castle due to the 9th generation of van Plotho’s becoming heirless. The castle managed to survive both World Wars, including the first, when it was suddenly commandeered by German troops who stationed themselves there for the duration. The Montblancs managed to keep overall control, and this wealthy family stayed on until 1986 when Baroness Mathilde de Meaux, the widow of the last of the Montblancs decided she had outgrown it. A public sale was conducted and a couple of brothers – Luc and Marc Van Honsebrouck won the bidding rights to the castle. The same Van Honsebrouck family who are the current brewers of the Kasteel beer – a nice tidy end to how this beer got its name.

The Kasteel Donker itself is a bit of a beast of a beer at 11%. I had drunk this a few years ago in London when I first started work and always remember it being extremely sweet. The beer looked majestic on pouring – chestnut brown with a rigid head and the first taste was excruciatingly sweet, proving nothing had changed at all. It had to be the sweetest beer I had drunk yet, even more so than the Mongozo Banaan (#1) on the very first step of this journey. It certainly wasn’t unpleasant, but the cloying nature and the caramelised residue it left on your teeth certainly meant it was never going to attain the highest score of the brown beers.

(Post-Script) – To continue the story of the castle at Ingelmunster, including a recent fire, please read Kasteel Triple (#181).

Watou is a bit of a haven when it comes to beer. If you start to plot breweries on a map of Belgium – which lets face it is a perfect thing to do on a quiet Sunday 😉  – you start to notice a batch of them all concentrated in a quiet area of countryside just north of the French border. Westvleteren, Van Eecke, Struise Brouwers and St. Bernardus are within a stones throw of each other, and each are renowned for the quality of their beers. The latter is based in the small village of Watou for which this beer is named.

The brewery claim that this beer was made for the French, maybe as a compromise for the fact that in 1793 this area was designated to fall within Flanders, as opposed to France. It’s odd because the beer sounds French, although there are villages that ended up in France at the carve-up that sound nailed on Flemish such as Steenvoorde and Winne Zele. It just happened that the geographical location of two rivers meant that it ended up in Belgian hands.

Watou generally translates as “watery area”, a direct reference to the rivers that dominate the locality. It only has a population of around 2000 people, but often the streets are bursting with visitors to the Flanders fields, or to a number of annual festivals that take place in the village and surrounding areas. One of these is a choir festival that takes place in St. Bavo church, the one so beautifully recreated on the label of this beer. The church has been a preserved monument since 1939 and contains the tombs of two of the first counts of Watou. Other visitors come to visit the brewery of St. Bernardus and the famous hop farms of Poperinge.

Local hops are used to make this extremely pleasant medium strength blonde. The bitterness of the hops is played off expertly against the zesty fruity tang which accompanies every sip. To be honest it didn’t start off as a great beer, but it grew with every inch downed. Where it began mellow and indistinctive, it ended alive and buzzing with energy. Rarely does a beer start as a six and end as an eight – though you would expect nothing less from a St. Bernardus.