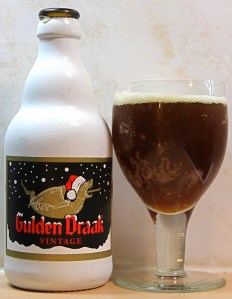 Although I had previously recounted a version of the legend of the Golden Dragon in my review of Gulden Draak (#145), there is an even more fanciful alternative in a book by Bertha Palmer Lane called ‘Tower Legends’. This anthology details the mystical dragon from Aleppo, and other similar stories related to an assortment of world belfries. It’s more a book for children, and considering children aren’t supposed to be drinking beers and almost certainly should have better things to do than read about beers, I am going to dispel all those myths right here. I did the same whistleblowing recently on the gnomes of Achouffe (#185), and nobody there has come knocking on my door yet.

Despite the fact that the people of Bruges seem to think that their Golden Dragon was stolen by the people of Ghent in actual fact this is complete baloney. It’s hardly surprising they might think this though given that Emperor Maximilian once labelled his own Brugeois people as mad (Brugse Zot #36). We can assume that without the invention of broadband at that time that maybe word of mouth and propaganda was responsible, although the myth has permeated through to the 20th Century. Not only are there still regular requests in Bruges to have the dragon returned, even the people of Norway made a request in 1918 for their claim on the prize. It was after all a Norwegian king who in the legend had first donated the mythical dragon to the Turks. Sigh.

The actual dragon that sits atop the belfry in Ghent was commissioned at the request of the people of Ghent in 1378. It was suggested the dragon would be symbolic of the power and freedom of Ghent at that time, and as dragons are supposed to never sleep, this creature would always look out across the city and protect its citizens. It has often been involved in key historical festivities, notably first in 1500 at the baptism of prince Karel, and on regular occurrences since when it would spit fire (no doubt some sly mechanical sleight of hand in case you were beginning to wonder). It has lain dormant however since 1819; no doubt when the people of Ghent began to realise it was in fact just a copper statue.

Whether you prefer the facts or to lose yourself in the legend, there is no getting away from the popularity of the copper statue and the role it plays in the identity of the city. The two beers made by Van Steenberge are equally iconic; although I haven’t myself quite worked out why as yet. The Gulden Draak Vintage was slightly better than the original beer, but to be honest it wasn’t by a great deal. The Christmas version started badly by viciously exploding on my lap (when will I learn?) and having managed to first decant it into two glasses and then scrubbed the sofa I was able to continue with what was left. I found the remains to be less artificial than the original but lacking in any real flavours which you might expect from a seasonal beer. It packed less of a punch but was slightly more rounded in flavour than the Gulden Draak. I may be in the minority on this one but I’d give both beers a wide berth – once again the truth is less interesting than the hype.