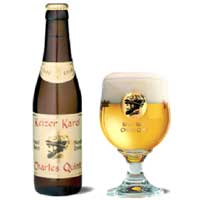 If you studied 16th century history you may know Keizer Karel or Charles Quint by a different name – Emperor Charles V. His realm was so large at one point that it was popularly described as one in which the sun never sets – in actual fact it spanned almost four million square kilometres. He was notably the most powerful man in the world during the mid 1600s as both the Holy Roman Emperor and King of Spain, and all her foreign lands. Why then was this leading figure of world history so associated with Belgian beer?

The answer lies in his heritage. He was born in 1500 in Ghent and was brought up in Mechelen, Brussels and Leuven – all fiercely proud Flemish cities, and at the age of just six, he inherited his father’s territories of the lowlands and Franche-Comte. His Aunt Margaret acted as regent until he was 15 years old, and Charles then took over in full force, adding a number of new territories to a new unified lowlands of which he was the ruler – this included his birthplace of Flanders, levered away from the French. Although he spent the majority of his time in Spain and her outlying lands, his heart was always in the place of his birth, and he ensured a unified nation for his heirs when he eventually abdicated in 1556 and then passed away in 1558.

The brewers Haacht have celebrated the reign of Charles Quint through two beers which symbolise the power of his Empire. This Keizer Karel Blonde symbolises the pure morning light of the rising of the sun on one side of his realm, while the Keizer Karel Rouge (#134) represents the ruby red of the warm evening shimmer as the sun sets on the other. There are other stories about good old Charles Quint, and I will save them for later as it isn’t just Haacht who celebrate this man on a beer label – some go much much further.

Good little beer this. Actually drunk a couple of months after the best before date but still tasted remarkably fresh. A great strong fruity aroma on opening, and a very clear pale golden pour with barely any head. What looked slightly insipid initially was eventually very pleasant on the tastebuds with the 8.5% clearly evident. Fruity and sweet with undertones of vanilla ice-cream, this went down far too well. I Just wish I’d had another waiting in the fridge.