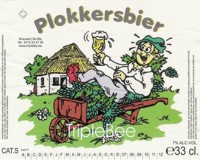 Plokkersbier is a tribute beer specially brewed by de Bie in honour and appreciation of the hop-pickers of the Poperinge region. Plokkersbier means “Pickers beer” in the local language, and the label of the beer depicts one of these folk of old, relaxing on a barrow of hops and quenching his thirst with a well earned beer. There is the other possibility of course that while everyone else is working, this lazy bugger isn’t !

Poperinge is the hop-capital of Belgium, with hectare upon hectare of prime crop needing to be harvested. Much of this is now done mechanically, but in the olden days the fields of Poperinge would be awash with seasonal workers chipping in to bring the crop in. It wasn’t just local people from the country who were used – amazingly, many townspeople and city dwellers would flock to the country in holiday season to escape the soot and the bustle and pick hops. It may seem strange to us now, but it was such a tradition in Belgium, that everyone went hop-picking – a tradition that dates as far back as the Middle Ages.

Days would start as early as 7am, where families and friends would join a cavalcade of carts, bikes and charabancs put on by the farmers, laden with food and drinks to be consumed as they worked. Each individual or family was paid by weight, and thus the more each could collect in their baskets, the higher the wage at the end of the day. Camaraderie was very common between workers, although one always had to be alert to the gypsy children who would try and steal from the workers baskets. The foreman would get around all the workers with a vegetable broth or soup, while each took turns to shelter from the weather on their hessian sacks. I feel almost nostalgic just thinking about it, with vague recollections of Sundays spent fruit picking in Essex as a child flooding back.

With such pleasantries running through my mind, it was with some disappointment, that the beer didn’t quite live up to the mindplay. It was probably one of the better beers I had tried from de Bie, but up to now that wasn’t really saying much. Again, it may have been that the beer was a long time out of date, but that isn’t usually a major issue for Belgian beers if they have been stored well. It was an attractive misty blonde, bordering on amber, with a very fruity mouthfeel and aftertaste. It began to wane and fade midway through, just as I probably would if I was in the fields picking all day. I expected a bit more from a 7% beer to be honest.