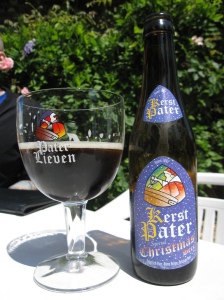 Christmas beers largely exist for a number of perfectly good reasons, which if you want to revisit please feel free to check out the Bush de Noel (#83) – the first Christmas beer of my journey. For me, the best reason to have a Christmas beer is to snugly sink into the traditions of yuletide, and a strong, dark, rich and wholesomely fruity beer is simply perfect on a cold winters night.

The idea of these kind of drinks is nothing new, especially in the UK, where mulled wine is a particular favourite at Christmas. I began to look back historically at the types of drinks served at this time of year and one of the earliest forms of Christmas beer turned out to be a drink known as Lambswool, which seems to have been fairly common as far back as the late 15th Century. The brew consists of spiced ale (or in later years cider) and baked apples. There are various explanations for the name; although the most likely is that the light colour and frothy appearance on the surface looks remarkably like the sheared wool of a lamb.

The odd looking drink was traditionally associated with the act of ‘wassailing’ – which basically amounts to a procession of merry persons (usually inebriated on lambswool) who wander their locality toasting either a) their neighbours or b) the environment. The first custom of ‘house visiting’ usually requires the females to dress up in bows and ribbons and offer their bowls of lambswool to owners. The second custom is slightly more bizarre, in that usually the males wander fields and orchards ladling their lambswool over crops and trees, and singing ancient rhymes. The idea in Pagan times was that this would guarantee the crop for the following year. It is largely now just a fading tradition of folklore which tends to occur in country villages around Somerset and Gloucester on Twelfth Night (January 5th) or thereabouts.

I normally make some kind of mulled wine over Christmas, however as we approach this festive break I am going to break from tradition and supplement my Belgian beers with some lambswool. Essentially a good half a gallon of real ale, combined with some apples, nutmeg, ginger and brown sugar should suffice. I will be the new boy in the street so will decline the dressing up as a morris dancer part though. Anyway, enough of this frivolity – what about the Kerst Pater Special? This is a much better beer than the other Pater Lieven brews (#18, #73) that I had tried thus far. It was punchy on the nose, and continued to work on my tastebuds. It had all the attributes you associate with a good Christmas beer – rustic fruit, spice, cloves, and cinnamon. This beer doesn’t get a lot of press but is certainly too good to waste pouring over your neighbours perennials.

Thanks to Bernt Rostad for the photograph